A short while after his dominant wife abandons the wimpy and meek Hayati, who is a literary teacher in a patriarchal town, the police find an unrecognized female corpse by the lake. Hayati wants to state that the body belongs to his wife and to take the blame for the murder that someone else committed.

Hayati is a small-town literature teacher and a one hit wonder author who tries helplessly to hold on to his past: his shattering marriage, his sick old mother, a decaying walnut tree and the memory of his father. Instead of moving on with his life and taking control, he passively accepts its blows and is only interested in digging into the past, until his discovery forces him to confront his own weakness and answer the question: is standing idle while witnessing evil being done is just as much of a sin as doing it? 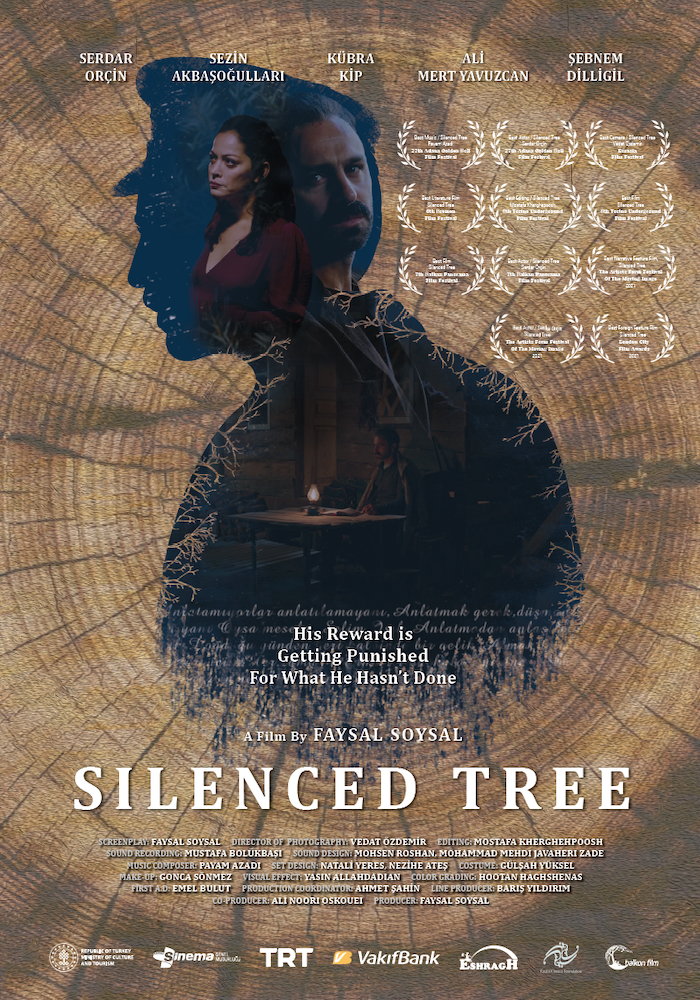 Scenes From The Film

When I was on my way to find and establish the language of my cinema, being forced to watch all the injustices and murders of our century played a big role in choosing story of ‘Silenced Tree’ for my second film. Even though recently the media’s attention to the increasing number of killings of women (in 2019, 474 women were killed by violence in Turkey) intensified in recent years, I noticed that there is not a sincere and worthy study, mentioning these tragedies. The most tragic issue was the fact that this savagery was still happening in a society that emphasizes morality and justice a lot. I want to look at a woman’s murder as a side-story from a different perspective and to bring in different dimensions.

With this film, I want to find the dying down fire of our conscience by confronting us, namely humanity, with our dark and cowardly traits and blaze the fire with optimism. For this reason, I want to penetrate the cost of witnessing a murder and suicide over a minimal event within different perspective. In my story, I want to discuss in detail the obscure literary teacher Hayati’s being a specter to a murder (slaughter of a woman by his husband) outside the town and not do anything against it as a problem of the entire humanity’s consciousness issue. I designed Hayati as a writer, who tries to protect his hope in the name of artistic creation in distress and deprivation like Van Gogh, so that we can think more broadly about what a pathetic and impotent individual can do and can not do in the face of crime and murder. In this case, when a person is looking for a strong root and hope through writing and literature, despite starting to live with his father’s fate of suicide, what this person, disabled with feebleness, cynicism, and skittishness, will do when he witnesses a murder that his father witnessed. This question has always been a question I have encountered with different shades of environment that I lived in. In my film, Hayati, the most weak and helpless person among those who have power and potential, sacrifices him and undertakes the murder committed in order to clean the common conscience of mankind. Because he knows like we know that the killings of woman will not end with the capture of the killer. However, waking up the conscience of the society and pulling under great responsibility is a big step forward for the future generations not to crush the weaker ones.